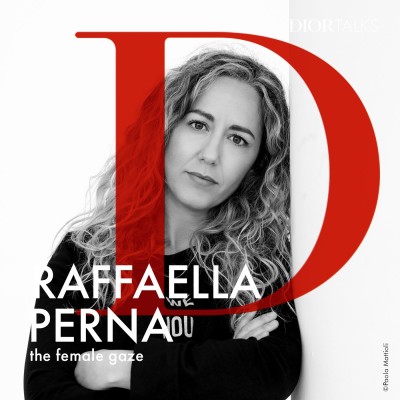 Welcome to the 17th episode of the Dior Talks series ‘The Female Gaze’. With the term developed in response to the writings of feminist film theorist Laura Mulvey, this podcast series will explore how the work of the female photographers, directors and creatives collaborating with Dior offers a radically new and progressive image of women.

In this new episode, series host Charlotte Jansen, a British journalist and author, talks to Raffaella Perna, the highly-esteemed Italian art historian and theorist of feminist visual cultures. A prolific writer, Perna has been based in Rome for much of her career, maintaining her theoretical practice and teaching widely, including at the prestigious Sapienza University. She is also a curator, and last year co-curated with Marco Scotini the exhibition The Unexpected Subject: 1978 Art and Feminism in Italy at the FM Centro per l'Arte Contemporanea in Milan, sponsored by Dior.

Perna has a long and distinguished biography as a specialist in Italian feminist art, and the country’s feminist movements in general, most particular during the vital and energized years of the 1970s. She has a particular focus on self-portraiture and its ramifications for female creative agency. She first met Maria Grazia Chiuri in 2008, through feminist icon and artist Tomaso Binga, to whom Charlotte has also spoken as part of this series. The two immediately identified with each other through their mutual passions and concerns, and Perna was instantly struck at how unusual it was for Chiuri as a fashion designer to be so influenced, and so creatively driven, by the politics and conceptual concerns of the movement. She also recognized how influential fashion is, and how interesting it is to consider the potential for its impact as a vehicle for conversation and action.

Here, Charlotte Jansen chats with Raffaella Perna about her dedication to the individuals and trailblazers who have formed the very specific and challenging feminist movements in Italy. The ’70s marked an extraordinary time for women in the country, as a previously conservative and religious society in which women had always occupied a constricted role was exploding and expanding. Women were writing, teaching, making art and campaigning as never before, and Perna is in the unique position to both remember and contextualize it all. She describes the rich landscape of relationships and collaborations which constituted the world of Italian feminism at that time, and her role as a primary theorist and recorder enables her to offer meaningful, prescient comment on the contemporary situation in 2020.

Raffaella Perna is one of the only The Female Gaze guests who has not been either a photographer, director or artist herself, and Charlotte Jansen takes the opportunity to delve deeply into the founding principles and dreams of feminism, which has inspired and continues to inspire the work of the Creative Director of Dior women’s collections so profoundly.