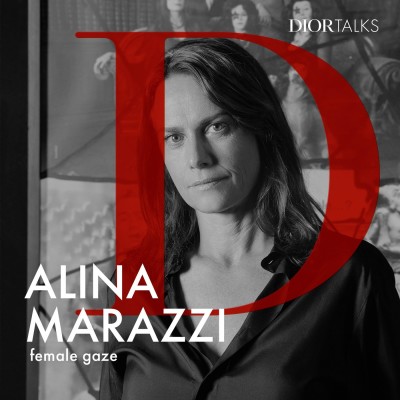 Welcome to this 13th episode of the Dior Talks series ‘The Female Gaze’. With the term developed in response to the writings of feminist film theorist Laura Mulvey, this podcast series will explore how the work of the female photographers, directors and creatives collaborating with Dior offers a radically new and progressive image of women.

In this new episode, series host Charlotte Jansen, a British journalist and author, talks to Alina Marazzi, the Italian director commissioned by Creative Director of Women’s collections Maria Grazia Chiuri to create a short film to be unveiled before the Dior Spring-Summer 2021 show. Marazzi, who lives and works in Milan, has been an established name in the worlds of film and theatre direction for twenty years and is much respected for the focus on female subjectivity, motherhood and memory in her work. She has always been profoundly influenced by feminist theory, particularly – and coincidentally – by the work of Laura Mulvey.

Alina Marazzi was born in Milan in 1964. She lost her mother, the writer Luisa Marazzi Hoepli, in 1972 and this trauma informed Marazzi’s work later in life. She studied film in London in the 1980s, focusing on documentary and experimental film. Her first feature, ‘Un'ora sola ti vorrei’ (‘For One More Hour with You’), about her mother’s life, was released in 2002, and since then she has released numerous further films, both documentary and fictional, as well as directing theater and contemporary opera productions. She has won various international awards for her work and her films have been screened widely, from BBC4 in the UK to the Locarno Film Festival in Switzerland. In 2014, she was a visiting lecturer at Warwick University, and she is guest lecturer at the Nuova Accademia di Belle Arti in Milan.

Here, Charlotte Jansen and Alina Marazzi discuss the phone call she received from Maria Grazia Chiuri, inviting her to create the short film for the Spring-Summer 2021 show, and the access the project gave her to the archives of the iconic feminist artist Lucia Marcucci, who has been a great inspiration both to her and to Maria Grazia Chiuri. The film creates a tableau vivant of Marcucci’s groundbreaking legacy and acts as a moving intellectual basis for the collection, as it were one of the pillars of the collection’s conceptual manifesto. Marazzi discusses the foundational ideas of her films, the thinkers and critics who have helped to crystalize her own message. She contemplates the striking similarities and crossovers between her own and the Creative Director’s working methods and the meeting of minds they experienced, which formed the basis of this beautiful short.