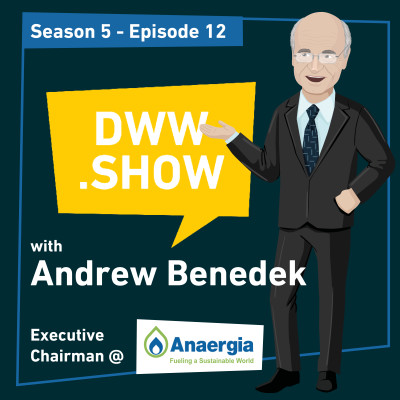 with 🎙️ Andrew Benedek, Executive Chairman of Anaergia, founder of Zenon and CEO for 26 years, a former member of the IWA board, and the inaugural recipient of the Lee Kwan Yew Prize.

💧 Anaergia aims to convert waste into useful resources, protect the environment, and sustain life for generations to come. Where some see waste, they see resources.

💰 How Zenon created the $4Bn/year membrane bioreactor market from scratch

🧰  How technology development wasn't a peacefully boring straight road either

🛋️ How with several million in his pocket and a beautiful house on the US west coast, 63-year old Andrew Benedek still wasn't done with business

💪 How over time, Andrew developed a 4-step recipe for changing the World

🏭 The one single business book you need to read, being an idealist, dealing with market players that copy you, failing and learning from failure, using gatekeepers to enter the mass market, believing in yourself, building for the future, becoming more ambitious every day... and much more!

➡️ Get the Full Story

S6E15 - Is Turquoise Greener than Green?

S6E13 - Your Poop has Superpowers!

S6E12 - The Problem with Quack Doctors

S6E10 - Are Ceramic Membranes the Future?

S6E7 - Why would you Burn Wastewater?

S6E4 - Can this Solve the World's Thirst?

S6E3 - The Problem with Water Networks

S6E1 - The Problem with Lithium

S5E19 - What if your Microbial Fuel Cells could Reach Out on Twitter?

S5E18 - How to Admit, Value, and actually Overcome the Economic Risk of Water

[Extract] "You're not gonna be able to entre three markets at once!" - Scott Bryan - Imagine H2O

[Extract] "The future is already there, it's just not equally distributed" - John Robinson - Mazarine Ventures

S5E15 - Passing the Baton: How to Bring Innovation to Market Faster & More Reliably

How can the Water Industry's Supply Chain Join Forces to reach Net Zero?

S5E10 - Why is One Water the Best Way to Manage our Vulnerable Water Cycle?

[Extract] "Net Zero is not the next new thing, it's an operating environment!" - Maria Manidaki - Mott MacDonald

[Extract] "You must consider the future operation and plan for the next 10-15 Years!" - Stephane Bessadi - Asian Development Bank

S5E7 - How to cut Wastewater's Energy Related Carbon Emissions in Two at No Cost?

[Extract] "If you want to be a preferred supplier of Xylem, we want you to do this" - Austin Alexander - Xylem

S5E6 - Who will become the US's first Water Reuse Champion Ever?

[Extract] "We'll take our wastewater, treat it, and give it to you to drink" - Jon Freedman - SUEZ WTS

S5E4 - How to Save Time, Money, and Water thanks to 92% Accurate Leak Detection

S5E3 - What would it Empower, if Water Actually Became a Non Fungible Token?

[Extract] "How could we provide mechanisms of Transparency?" - Katrina Donaghy - Civic Ledger

S5E1 - The 7 Secrets of the Water Company of the Year you shall Absolutely Steal!

[Extract] "I have no explanation for these valuations!" - Reinhard Huebner - SKion Water

S4E20 - 17 Decisive Insights that could Actually Impact the Water Industry

[Extract] How do Specialized Water SaaS beat Behemoths the Likes of Asana or ESRI?

[Extract] "This is the lowest emission, most sustainable and circular economy way"

S4E18 - Is the Hydrogen Economy actually an Astounding Investment Opportunity?

[Extract] "The Idea is to Mobilize Private, Industry, and Policy Money"

The Truth Behind the 470 Bn€ Hydrogen Opportunity

S4E17 - Is Hydrogen more of a Water Sector Miracle or a World's Decarbonization Problem?

REPLAY - How Long will it Take to Grow? The 4 Stages of Water Innovation!

Here's Why We're On Replay This Week

[Extract] "Once you solve the extreme, the median is much easier!"

S4E14 - How to Establish Compliance Confidence for Every Water Utility

[Extract] Water Professionals are Conservative for a Reason!

This is Liquid Energy! (NOT Wastewater)

S4E13 - Can Groundwater Trading help California save $580 million per year?

[Extract] A Groundwater Market Could be Best for Everyone!

S4E12 - Could we Please Stop Burning Industrial Wastewater? This is Much Better!

[Extract] Nobody wants to Pay for Sustainability. Not even you, at home!

Special 12 - What Happens to Water Management if we Build One Manhattan per Month?

S4E11 - Are you Still Fighting Green Algae? Here's What to do Instead!

Special 11 - Is Industrial Water a Dead Angle of the Water Industry?

Special 10 - What Shall Everyone Know about Nature Based Solutions?

Special 9 - The Essential of Water Finance - by 8 Subject Experts

Special 6 - Could Digital Water Actually be a Creative Disruption for our Industry?

Special 3 - How to Craft Better Water Stories and Maximize Impact (by 8 Experts!)

Special 2 - Shall we Better our Wastewater Reuse game? I asked 8 experts for Insight

Special 1 - What is the right Water Price? Here's what 8 experts have to say!

S4E8 - The Best Insights of the Internet of Water might not be Where you Think!

10 Surprising 2022 Predictions for the Water Industry: Would you actually agree?

S4E7 - How to make Hydraulic Modeling so Easy that even You will want to Use It!

[Extract] "What's the catch? Why is anything free?"

[Extract] SDG6 Failure is not an option!

[Extract] We have a Historical Chance to Rethink Water Management!

[Extract] A New Phase of Water with... a Negative Charge!

BREAKING NEWS: Is the VEOLIA/SUEZ Merger at Risk?

S4E1 - How to treat PFAS out of Water and protect our Health, Economy and Biodiversity

[Extract] "Imagine how cool it would be if we could have non-virgin PFAS?"

Is There a Hidden Power in the Most Universal Good on Earth?

S3E20 - Do Nature-Based Solutions Work? These New Case Studies Will Verify It!

[Extract] How to Prove that Nature Based Solutions Work?

S3E18 - How to Manage Flooding and Improve Water Quality without Steel, Concrete and Hard Engineering

Water is Too Cheap! Here's Why Raising the Price NOW will make it Affordable.

[Extract] The Science behind Iceberg Harvesting

[Extract] Declaring a "Green Jihad" on the Desert

This Iceberg Idea, Already Crazy in 1825, May Be The Future of Water!

S3E12 - Design Thinking Will Make You Fail Faster: That's Exactly What You Need!

[Extract] A Fool with a Tool is still a Fool!

The 3 Most Painful Failed Mergers of VEOLIA and SUEZ!

[Extract] How to Irresistibly Improve your Trade Show's Impact?

The Irresistible Rise of Bottled Water

S3E9 - How to Speak Up and Empower More Young Water Professionals

S3E8 - How Biomimicry Leverages the Best of 3.8 Million Years of R&D

How to Make 12 trillion dollars? An Overlooked yet Sustainable Cheat Sheet.

S3E7 - Is Software to Measure Water Quality Actually a Matter of Hardware?

S3E6 - 1001 Reasons Why, the Sustainability Puzzle is a Unique Opportunity

What is Ozone Treatment? An Old Killer Song or a Powerful Killer Gas?

S3E4 - Is Water from Air Actually a Scam or a Gift? You'll Be Astounded!

Is the Unicorn's Recipe to Success Useful in the Water Industry?

S3E3 - How Long will it Take to Grow? The 4 Stages of Water Innovation!

Can a Sector, Critical to 7 Billion Humans Really Be Worth Half of TikTok?

These 2 Mistakes Might Prevent Your Customers to Connect with You!

S2E19 - Do you Really Provide Job Security to your Best Workers?

S2E18 - How to Treat Wastewater in a Net Grid Positive Way while Mimicking your Body?

S2E17 - What's Maybe the Best Way to Make Four Dollars out of One?

S2E15 - How to do Competitive Intelligence in Plain Sight and Share it with Everyone?

S2E14 - Is Entrepreneurship the Missing Link to Shape the Future of the Water Industry?

S2E13 - Can we Turn Finance (Astoundingly) into the Water Sector's New Best Ally?

S2E12 - How to Consistently Deliver on the Promise as a Consultant Engineer?

S2E11 - Fatbergs Right Ahead? Not if you Harvest the Right Data!

S2E10 - How to Master Kick-Ass Storytelling, Skyrocket your Water Narratives and Boost your Sales?

Who's the Best, Ozone or Activated Carbon to Remove Micropollutants?

S2E7 - This Astonishing Technology will Turn the Wastewater Sector on its Head! Here's Why.

S2E6 - How can a Professional Zebra Skyrocket your Marketing?

S2E5 - How to get Water as a Service, Below Utility Prices, with Zero Money Down

About How Long have Wastewater Treatment Plants been in Existence?

S2E4 - How to be a Beacon and Trigger 1.5 Billion New Funding as a Fearless Nonprofit

S2E2 - Behind the Scenes of the Hardest Human-Made Material

S2E1 - How to Make the Best Use of Each Dollar to Cut Water Losses as a Small Community?

S1E20 - How to Clear Crazy Pollution Loads in an (Electrical) Breathe

S1E19 - How to Solve a Global Challenge in an Easy, Affordable, Innovative and Efficient Way?

[Replay] The Astonishing Journey of a (forthcoming) French-Tech Unicorn

S1E18 - Invisible Yet Actually in your Blood: Behind the Scenes of the PFAS Threat

S1E17 - Save Time, Boost Value and Wow Customers in a Snap with these 5 Simple (AI) Steps

S1E16 - How to Clear Remote Places' Problems, Solve Environmental Issues and Revive Wastewater in a Blast?

S1E15 - How to Cleverly Embrace the Digital Craze in the Water Industry?

S1E14 - Water Sustainability is Only 4 Steps Away (If You Escape Those 3 Pitfalls!)

[Replay] How Ideas Come to Life in Water & Wastewater Treatment

S1E12 - Behind the Scenes of the VEOLIA/SUEZ Bomb: Will It Really Happen?

S1E9 - How to Reap Heavy Benefits out of a Sumo

S1E8 - The Fine Line Between Plug and Play & Plug and Pray

S1E7 - It's Time to Recover that Damn Wastewater!

S1E5 - The Astonishing Journey of a (forthcoming) French-Tech Unicorn

S1E3 - How to Almost Double Treatment Capacity in About No Time

S1E2 - How Ideas Come to Life in Water & Wastewater Treatment

S1E1 - How to Solve the Wastewater Riddle in 6 Steps