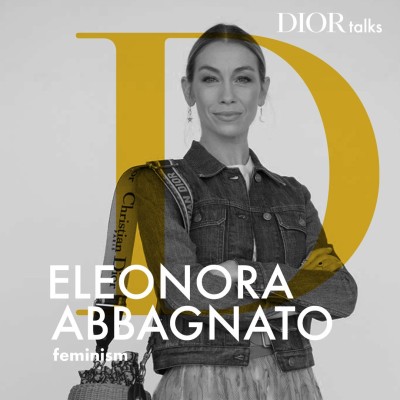 Welcome to ‘Feminism’, the new series of ‘Dior Talks’ podcasts, hosted by Justine Picardie. ‘Dior Talks’ creates fascinating spaces for expression, exploring the imaginations and discourses of the artists and thinkers who influence Maria Grazia Chiuri. ‘Feminism’ engages in dialogue with the women who have inspired the Creative Director of Women’s collections and taken part in bold, empowering collaborations with the House. An exceptional roster of guests shares the magic of their thinking and the key moments of their careers with biographer and journalist Justine Picardie.

In this third episode, Picardie talks to Eleonora Abbagnato, one of the most important female ballet dancers of her generation. The native Sicilian has risen to the top of the fiercely competitive world of classical dance in both Paris and Rome. She has formed a close and fruitful friendship with Maria Grazia Chiuri, whom she asked, in 2019, to design costumes for ‘Nuit Blanche’, a new production paying tribute to composer Philip Glass, created by young French choreographer Sébastien Bertaud, in which she starred. Chiuri’s enduring love of dance and movement chimed with Abbagnato’s passions to form the first in a series of profound collaborations.

Eleonora Abbagnato was born in Palermo, Sicily, in 1978. No one in her family had ever danced before, but at the age of four she started to dance on her own in front of the mirror at home. She left her childhood home at age ten to study dance in Monte Carlo, and at 13 was touring Europe with legendary choreographer Roland Petit and his production of ‘The Sleeping Beauty’. She studied at the elite École de Danse de l’Opéra de Paris and joined the legendary Paris Opera Ballet in 1996. She has since had a meteoric ascent and, in 2021, is looking forward to her farewell performances as an étoile, or principal, this summer. She has also been highly prolific in her native Italy, where she co-hosted the Sanremo Festival in 2007 and, since 2015, has been the Director of the Corps de Ballet at the Teatro dell’Opera di Roma.

Here, Justine Picardie and Abbagnato hit the discursive ground running, comparing impassioned notes on the history of classical dance, the changing role of female dancers and the challenges, both mental and physical, that ballet presents. Abbagnato opens up about the huge strain female dancers in particular are put under by (mostly male) choreographers but goes on to reflect on the important and vitalizing contribution women directors and choreographers are now making to the field. She considers the importance of motherhood, both the inspirations of her own mother and also her hopes and ambitions for her young daughters today. They unwrap the special connection she has formed with Maria Grazia Chiuri, and the understanding of the essence of form and movement that has enabled her and her fellow dancers to express such beauty and empowerment while performing in the designs of the house of Dior.